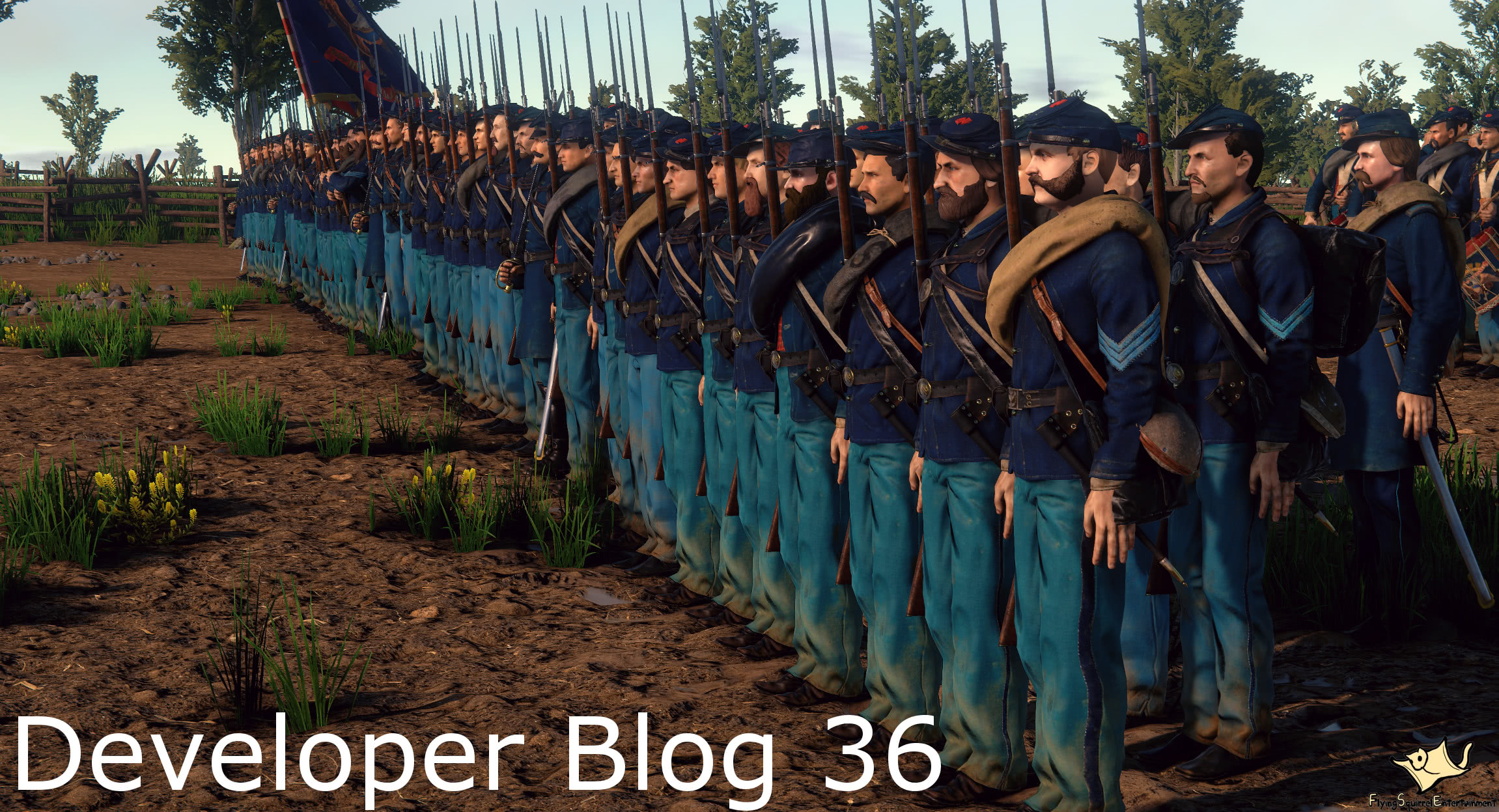 BCoF - Developer Blog 36
Dec 15, 2018
Welcome back to our Developer Blog. This week we are going to talk a little more about the 20th Maine Volunteer Infantry Regiment. We once again, recommend watching any of the videos in this Blog in 4k for the best quality. Clicking on any of the images, will open a higher-res version of them. By the way, we have just created a new Discord Server! You can now talk to us directly about the game there.

20th Maine Volunteer Infantry Regiment Part 2/2
In our last blog about the 20th Maine, 2 weeks ago, we talked about a single company and have shown ingame-renders of some of the enlisted men and non-commissioned officers. In this weeks Developer Blog we will be talking about the regimental structure in the game and we will show some of the commissioned officers in more detail.

The screenshot above shows the entire 20th Maine Volunteer Infantry Regiment as it would appear in the game, in line of battle. Note that we do not have horses implemented yet, and as such, anyone that should in reality be mounted, is currently on foot.

You might have noticed that the battalion is not having the correct composition of ranks that a battalion should have had in reality. We are missing not only several companies, and the skirmishing companies all together, but are also missing a bunch of other ranks. This has three reasons. Firstly, it was not uncommon during the civil war, that a battalion would be reduced so much in size that many ranks were simply missing or no longer needed.
Secondly, it would blow the scale of our game if we were to include every single rank that a regiment would have had.
Thirdly, we also decided to attach one field musician to each company. This is not realistic, as in reality only the two designated skirmishing companies would have had field musicians directly attached to the company. However, for gameplay and scale reasons the Colonel will be able to decide which, if any, company he wants to detach as skirmishing company. On the picture above, none of the companies are detached.

Regimental structure in the game
The regimental structure in the game will be very different to what you have seen in other games before. Most games, including Napoleonic Wars, focus entirely on the CO-NCO-Private-Musician aspect of the regiment. They do not offer options for different companies, or ranks above the Captain rank. In Battle Cry of Freedom, we instead opted for a more advanced system. Each Regiment is split into several companies. Each of these companies has different unit slots available for the player to choose from.

For example, in Napoleonic Wars, selecting a unit would look like that:
Faction A > Infantry > Regiment > Rank

In Battle Cry of Freedom, unit selection will look like this:
Faction A > Infantry > Regiment > Company > Rank

As you can see, there is one more step required to select a unit. In addition to that, there are overall more ranks available. The company structure in the game will be the same for all infantry units, with the exception of the companies letters. Here is how it looks for the 20th Maine Volunteer Infantry Regiment.

Here is a picture of the Regiment in line of battle, with their respective companies highlighted.

Company C to I
We talked about the company structure in our previews Blog, so we are not going to into detail about that in this Blog. All “normal” companies will have the exact same structure, with the exception that some companies might have access to different weapons and obviously, each company has their own set of company insignia. But obviously not every soldier has company-insignia, especially brass letters on hats are not very common. 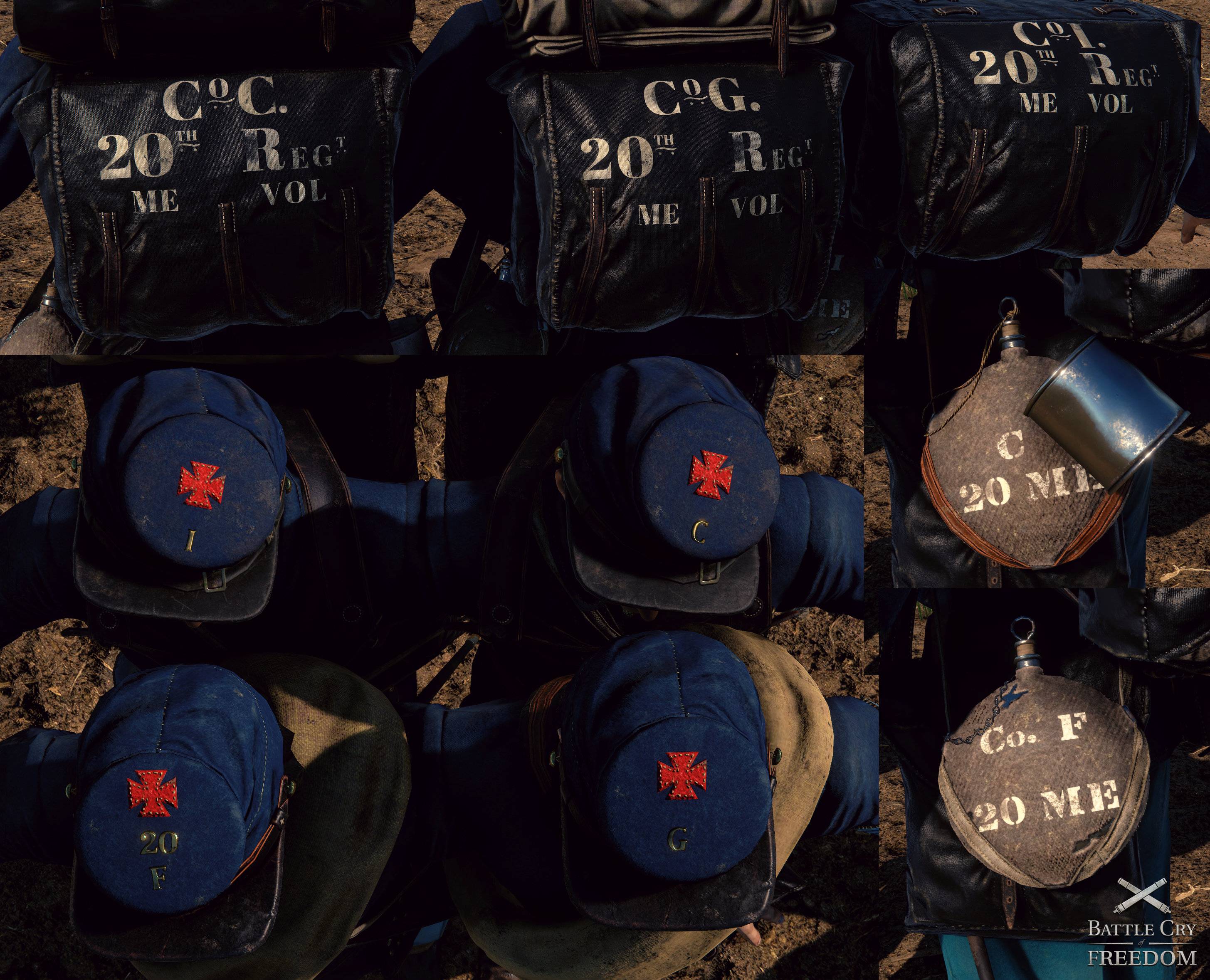 Here is also an in-game render of the 2nd Lieutenant of Company C. Even though he is a commissioned officer, he is still wearing a blanket roll. In his scabbard is the regulation "Model 1850 Army Staff and Field Officers Sword", and a there is a revolver in a holster on his right. He is wearing normal brogans with dark blue pants with bright blue piping along the center seam. Unlike any of the privates and non-commissioned officers, he is wearing an officers-frock coat with a single row of buttons and shoulder pads which indicate his rank.


Field Music
The field music company features 8 player slots. Four for drummers and four for fifers. There is not much more to say about it, but if you want to know more about musicians in general, please take a look at our previous Developer Blog. 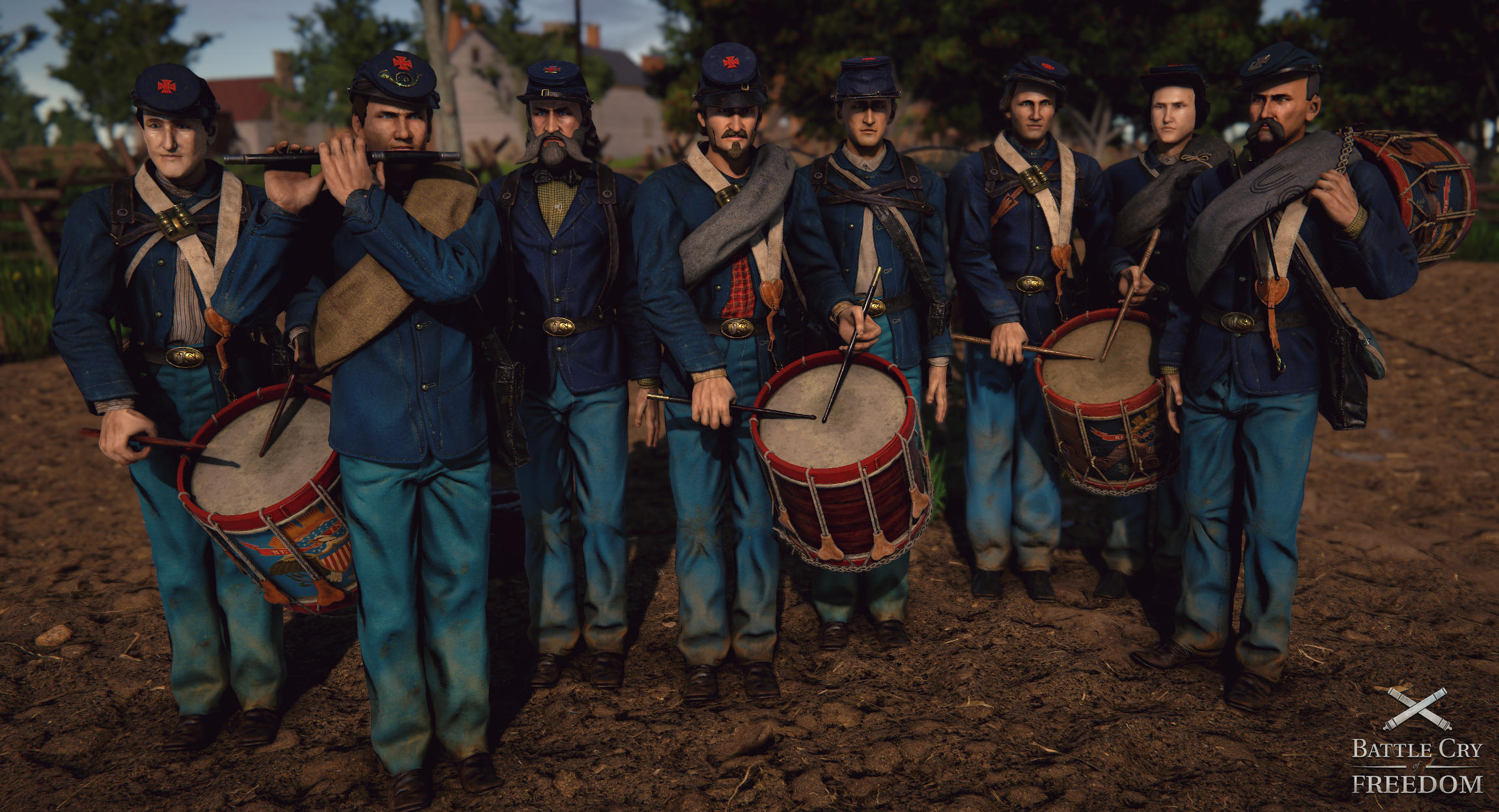 Below is a render of one of the drummers of the 20th Maine. He is wearing a non regulation sling for his drum and is otherwise equipped just like any of the other privates, minus the missing cap-, cartridge box and bayonet scabbard, as he has no use for it. He is wearing his canteen on the right side to make more space for the drum. If you look carefully, you can even see his hardtack inside his haversack!


Color Guard
Just line in reality, the color guard in the game is composed out of several corporals from each of the battalions companies and a sergeant who is carrying the color. The 20th Maine carried both National and Regimental colors and as such, the color company will have 6 slots for corporals and 2 for sergeants. We are purposely leaving out the file closers to keep the size of the color guard at a realistic in-game size. Realistically, there would also be a file of corporals in between the two colors. Again we are leaving those corporals out, as the color guard would otherwise be to large. That being said, in reality a regiment would not carry any colors if it had less than 5 companies. We are cheating in that regard, as we are obviously simulating everything at a much smaller scale. 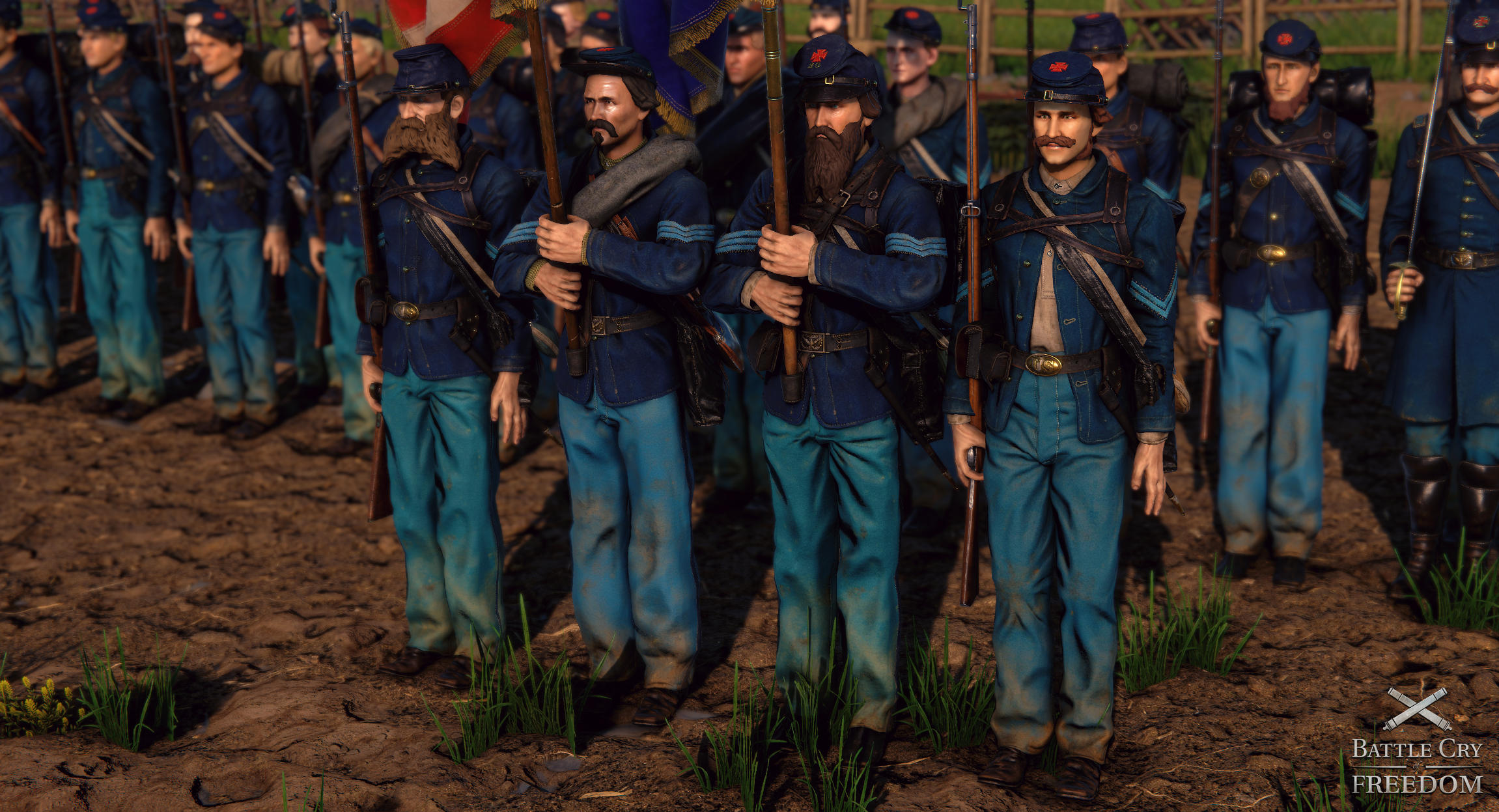 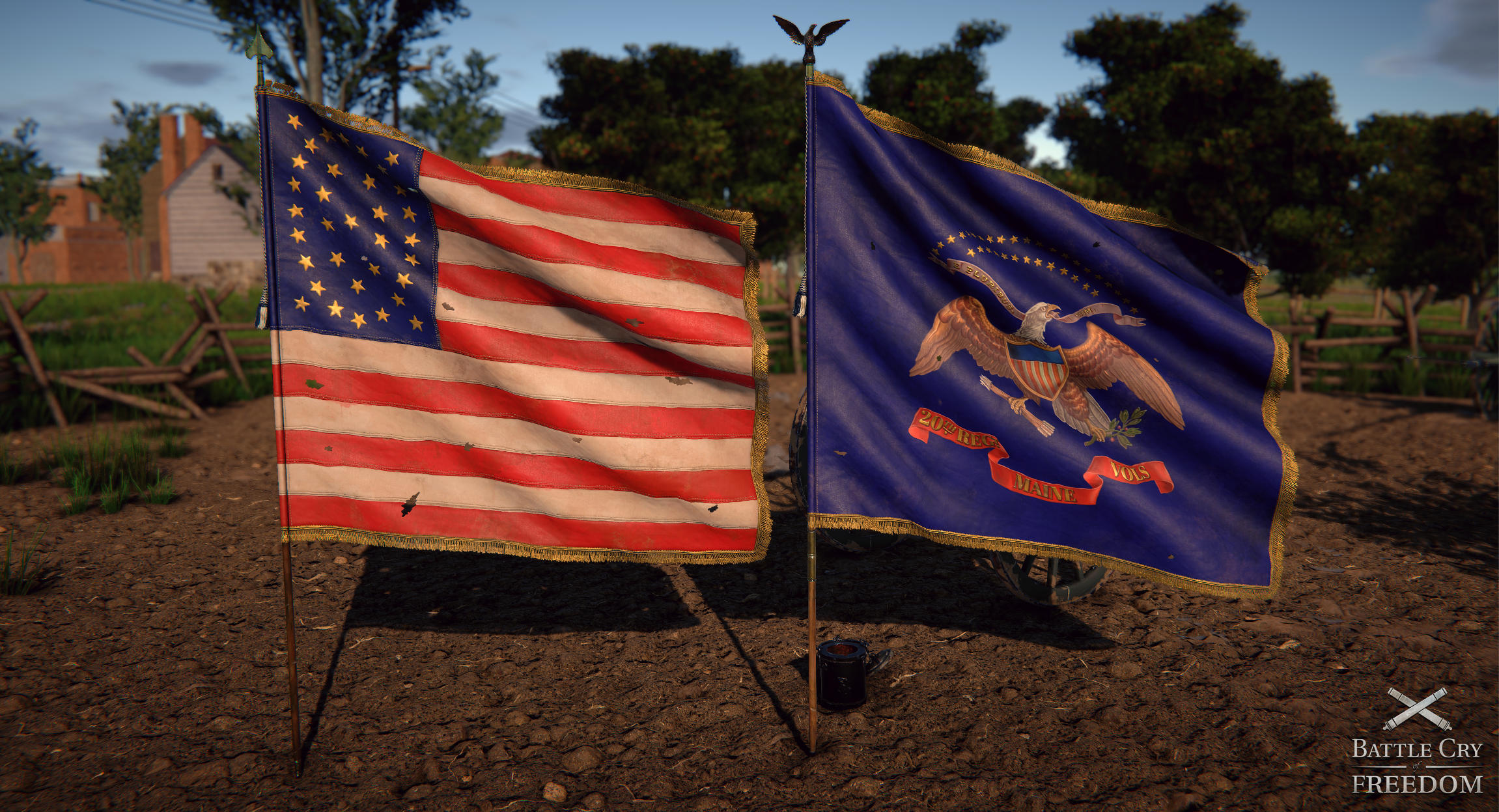 Regiment Staff
Equally, for the staff we are not going to simulate all ranks. We have decided to go for one Colonel, one Major, one Sergeant Major and the left and right guide. The left and right guide will be sergeants and will carry either a musket with a fanion inside the barrel or a guidon on a pole. Below is a picture of the staff.

We would like to note that we do not have much informations about the type of guidon (if any) the 20th Maine carried. As such, we will offer both the more traditional guidon on a pole and a guidon that can be inserted into the gun barrel. We have based the design of both on existing guidons from other Maine units, as that is the closest thing to the 20th Maine we could find. 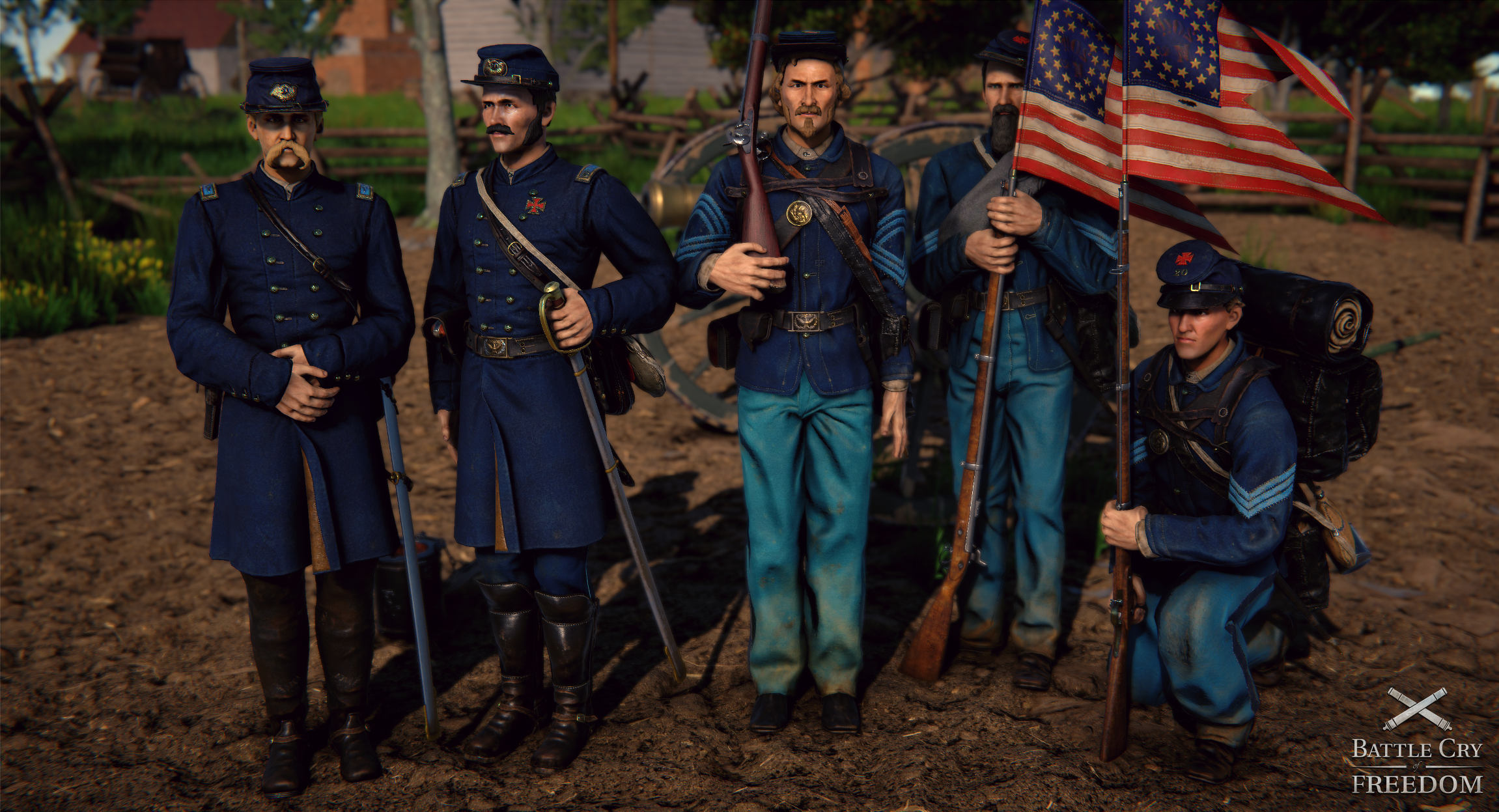 Here is a render of the colonel of the 20th Maine Volunteer Infantry Regiment. Unlike the 2nd lieutenant up above, he does not have to carry his own gear on him. Indicating his higher rank, he is wearing a double breasted officers-frock with different shoulder pads. Colonels are usually mounted, and as such he is wearing tall cavalry boots, that go up to his knee. His haversacks is a private-purchase haversack and most likely was used to carry important papers and orders. On his waist-belt he is equipped with a "Peterson-75 nonregulation Officers Sword" and a revolver in a holster.


Here is an ingame-render of the Sergeant Major of the 20th Maine Volunteer Infantry Regiment. Characteristic are his large Sgt. Major stripes and dark blue stripe on his trousers, indicating his rank. He has no company insignia on his backpack, as he is not part of any company. Other than that, he is wearing the same equipment as any other non commissioned soldier.


And lastly here is a render of the Major. He too is wearing an officers-frock coat with 2 rows of buttons. This particular Major decided to attach his corps-badge to the front of his frock coat instead of on the top of his hat. The badge indicates that he is part of the 1st Division, fifth Corps. Just like the colonel, he is wearing cavalry boots, although of a different model. His boots are not painted over, which is why one can see the white/brown stitching of the boots. On his waistbelt at the back on the right side of his hip he is wearing a small cartridge box which is useful for reloading his revolver, should that ever be needed. He is also carrying a canteen on a white cotton sling and a non-regulation leather haversack.


That is it for this weeks Blog! Thank you very much for reading this Developer Blog and we will hopefully see you next week!
In next weeks Blog we will be talking about the Melee System.