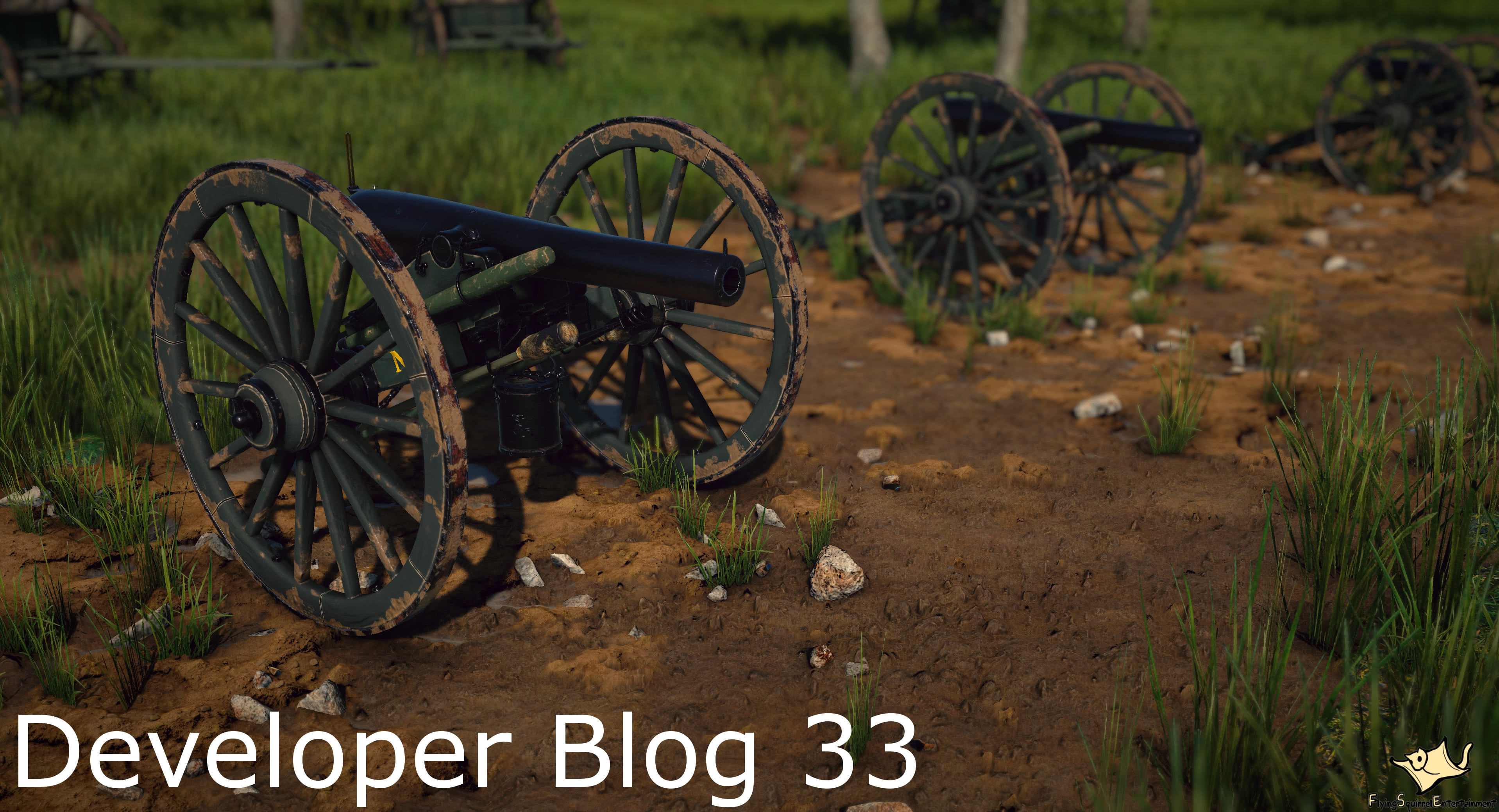 Hello and welcome back to our Developer Blog. You might have noticed that this weeks Blog looks slightly different to the previous blogs. We are currently in the process of creating a new Website using a responsive design which should make it easier to view the website and the blogs on mobile devices. Our website is not yet ready, but we wanted to at least allow you to view the blogs on mobile devices. Once again, clicking on any of the pictures in this blog will open a HQ version of them.

That being said, in this blog we are going to talk about Artillery, or to be more specific, about their visuals. But don't worry, the next Artillery related Blog will be going into more detail about the artillery class gameplay. As shown in previous Blogs 31 and 32, we will include a huge number of different weapons, each with their own graphics and gameplay. Our Artillery is no exception to this and we currently have 20 different Artillery pieces in the game.

Just like in reality, each of the guns will perform differently and each gun has its up- and downsides. The player will have plenty of different options to choose from, ideally selecting the exact gameplay style he prefers. Additionally, the differences between some of the Artillery pieces is far greater than the difference between two rifles. You simply can not compare a tiny 12pdr Mortar to a 100pdr Parrot Rifle...
We have really enjoyed creating all of the different artillery pieces. The guns are extremely detailed and feature anything from inspector and manufacturer markings up to carriage numbers. Rifled guns are actually rifled and all gun barrels are fully textured from inside. Here are a few pictures of some of the guns.

Like rifles and pistols, artillery can of course also be loaded with a wide range of different ammunition. Percussion-fused shells, time-fused shells, solid shot, bolts, canister and case shot is all already in the game and works as intended. All of them are fully modeled and textured and fit their respective gun. For instance, players will not be able to load 24pdr Howitzer shells into a 12pdr Napoleon. Below are screenshots of a few of our projectiles.

In reality, most ammunition came with charges pre-attached. This is also the case in the game. However, certain guns like howitzers or mortars require the powder bag and projectile to be loaded separately. Cannons can be double loaded, which requires removing the powder charge of the 2nd projectile and only loading the projectile + sabot.

Each cannon has its own set of tools that will only be able to load its corresponding or very similar type of gun. Loading a 20pdr Parrot Rifle with a 12pdr Mountain Howitzer ramrod is not possible. All of the tools can be used in melee as well. Here are some of them:

The player can now cut fuses for shells and case shot to different lengths. Charges have to be prepared and taken out of the corresponding limber or ammunition chest. Each has a section with ammunition and a section with tools that can be used to cut fuses. All limbers feature readable artillery tables, which are, as a side effect to our projectile system, actually useful in the game… 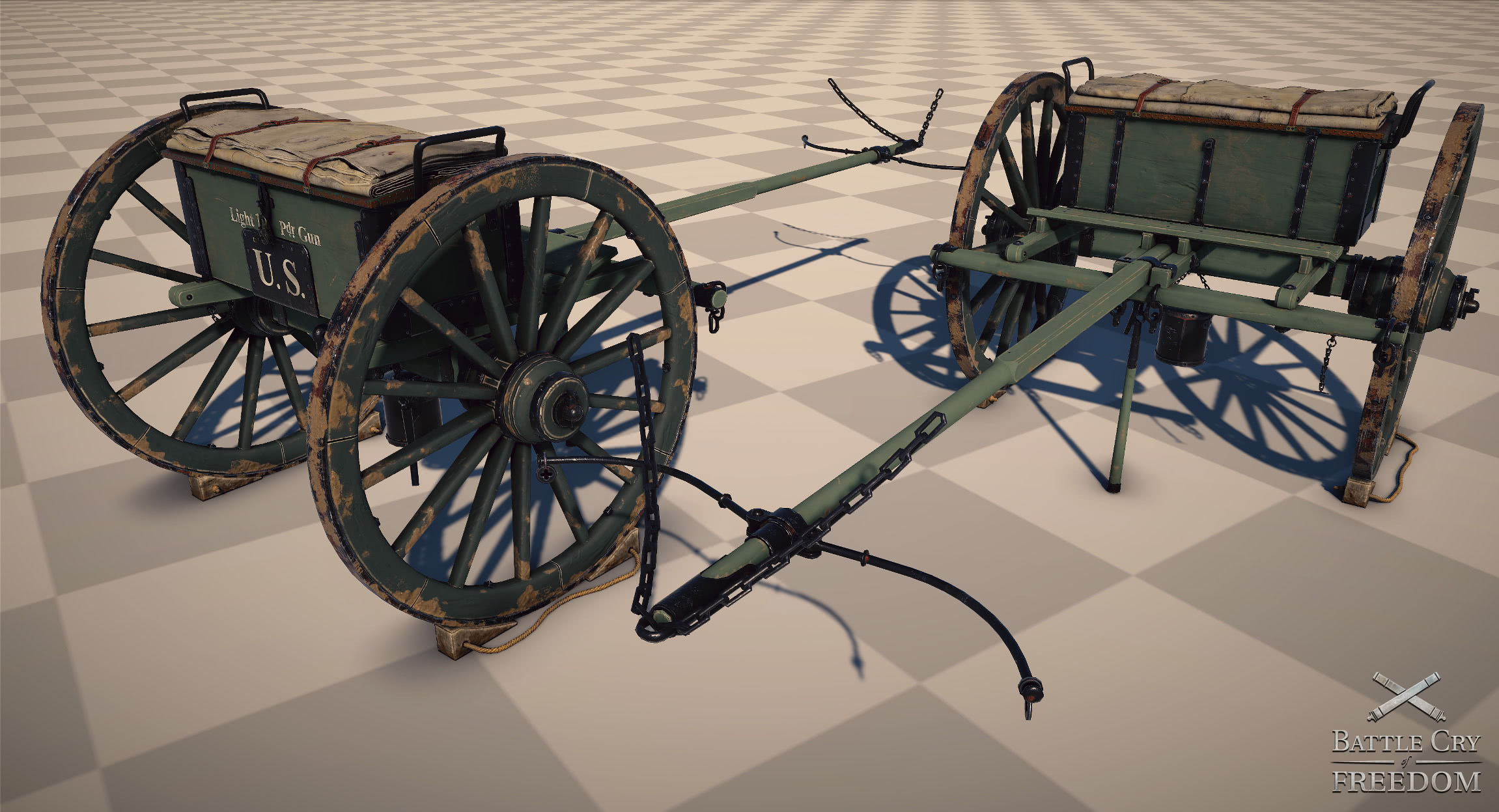 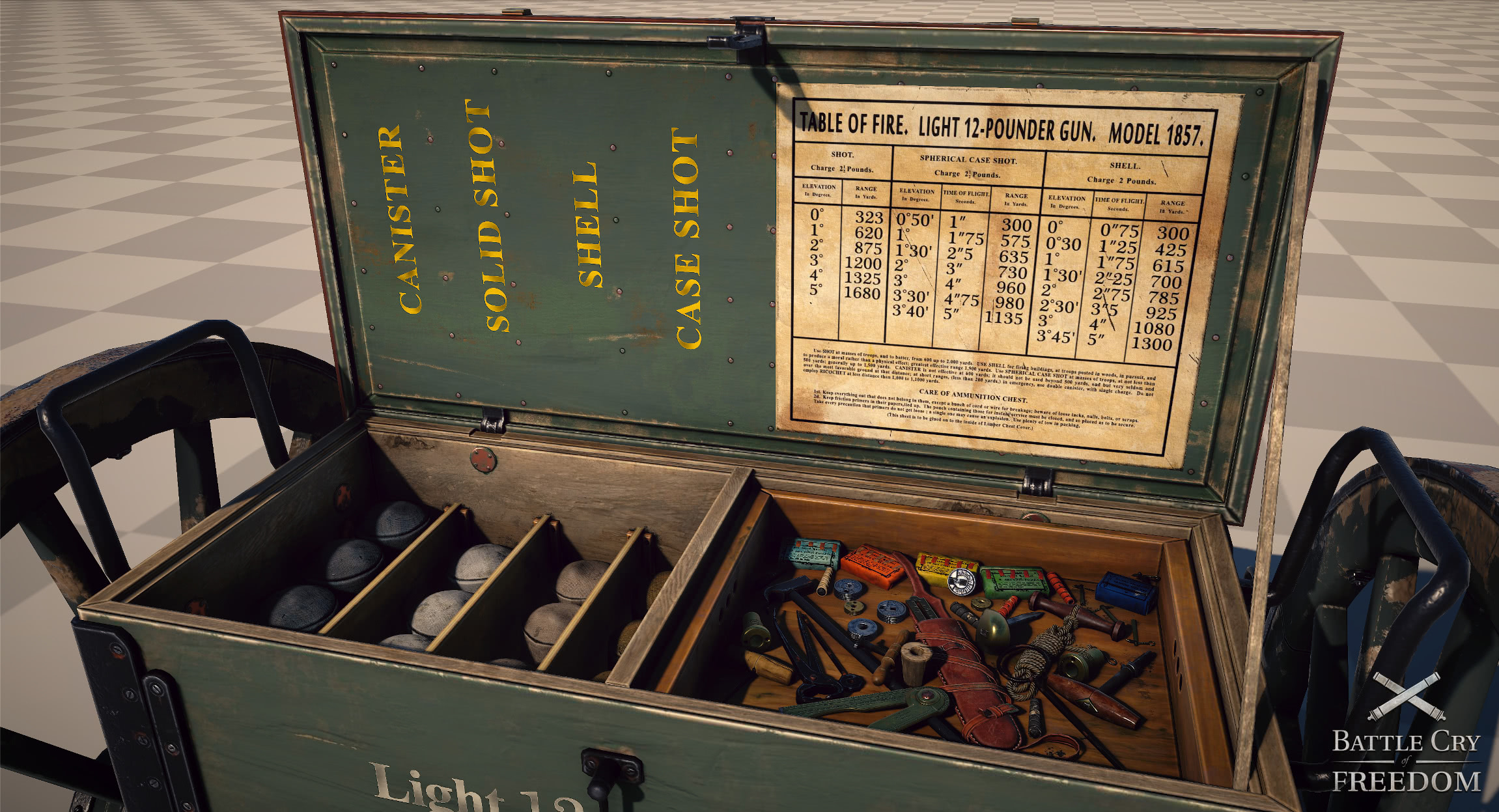 Unlike in Napoleonic Wars, limbers can run out of ammo, at which point they will have to be restocked with ammunition. This is where caissons will come in handy. Caissons carry 2 additional crates of ammunition, a spare limber pole and a spare wheel. Caissons also hold a number of tools like axes, shovels and pickaxes, which will come in useful for constructing artillery batteries and breaking objects that are in the way. But more about that in another blog. 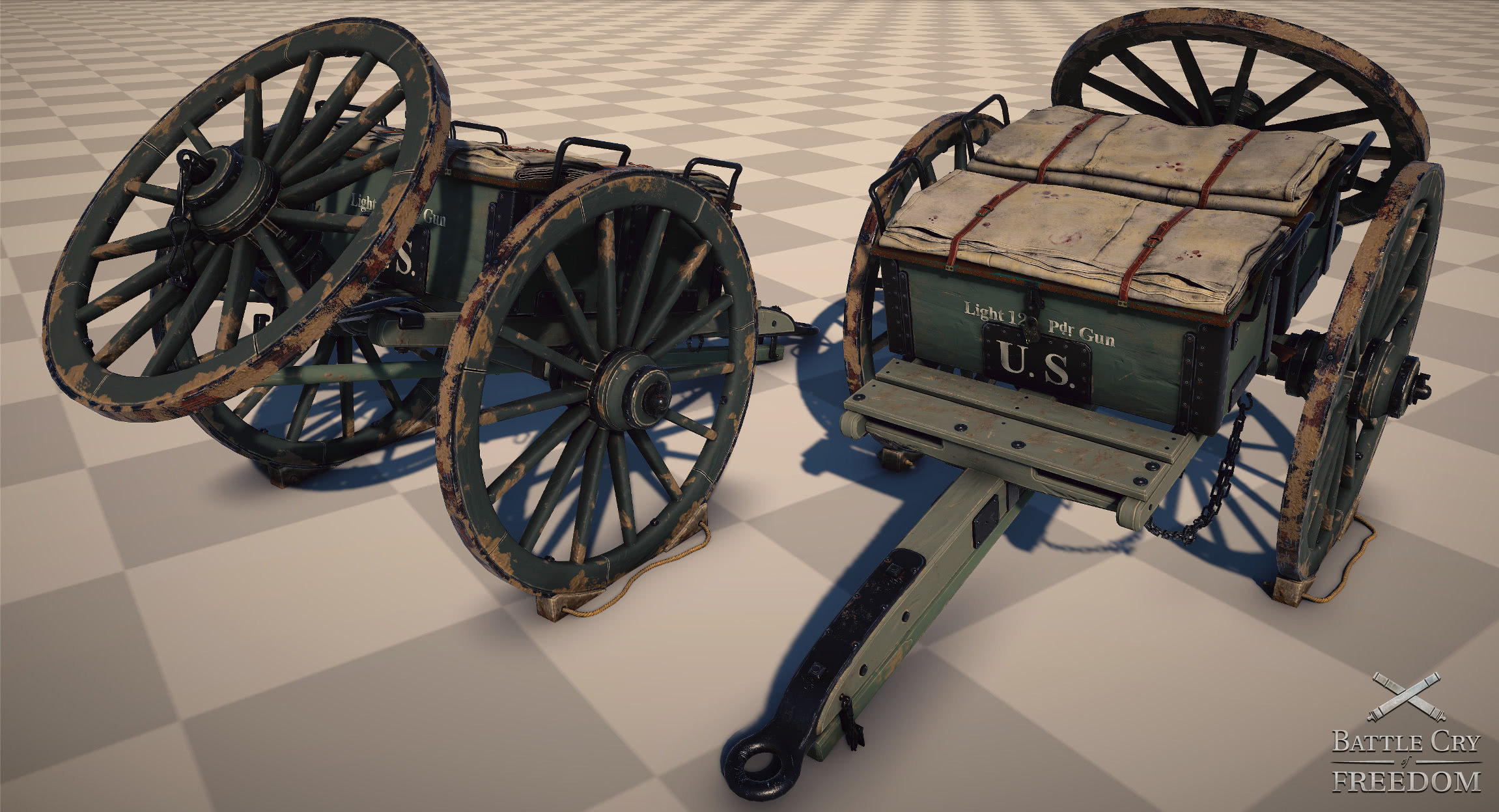 Talking about ammo... Just like rifle ammunition, ammunition for artillery also came in special ammunition crates. Should the player ever run out of ammunition, he can restock the caisson and limber using these crates. 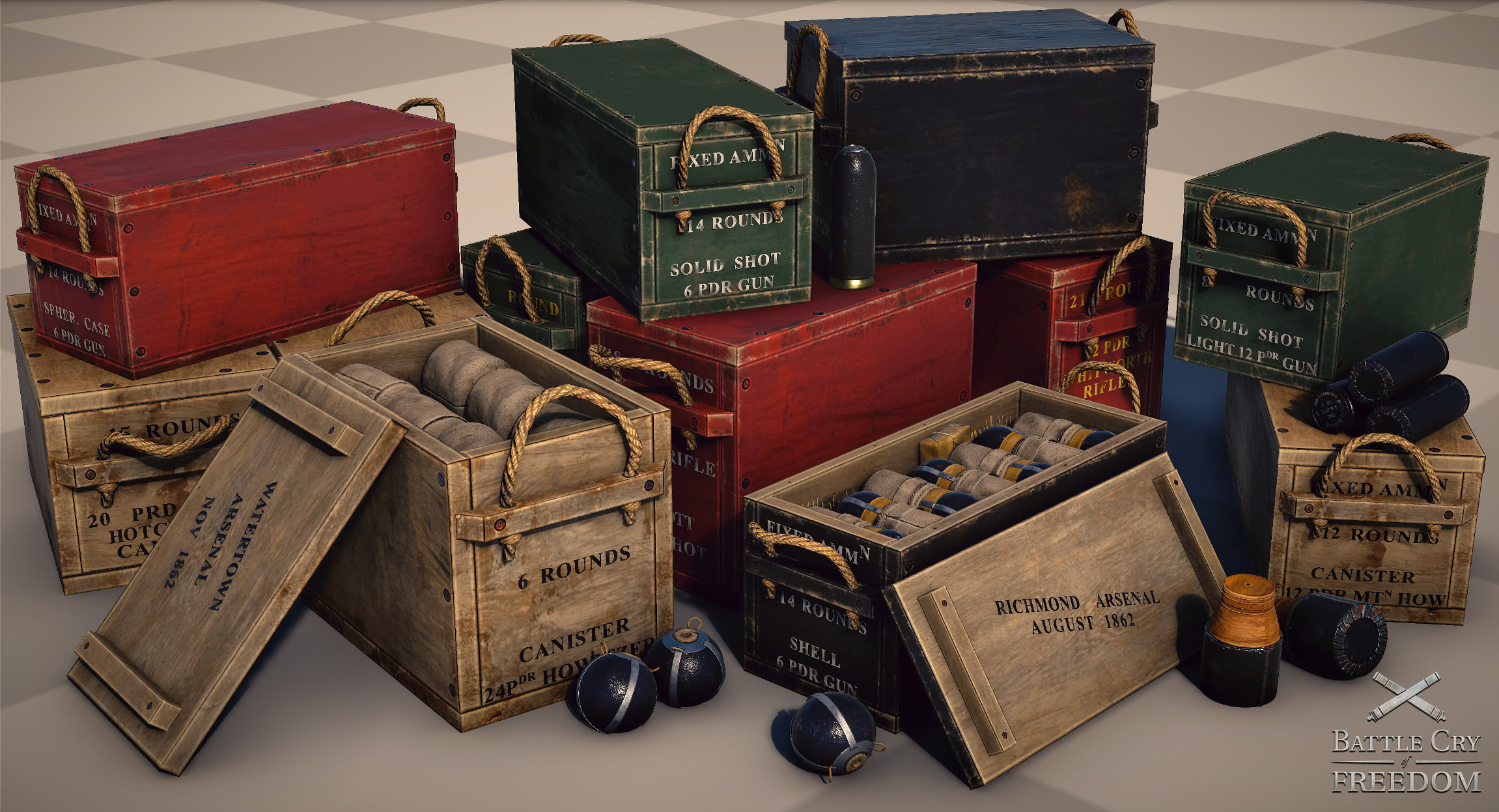 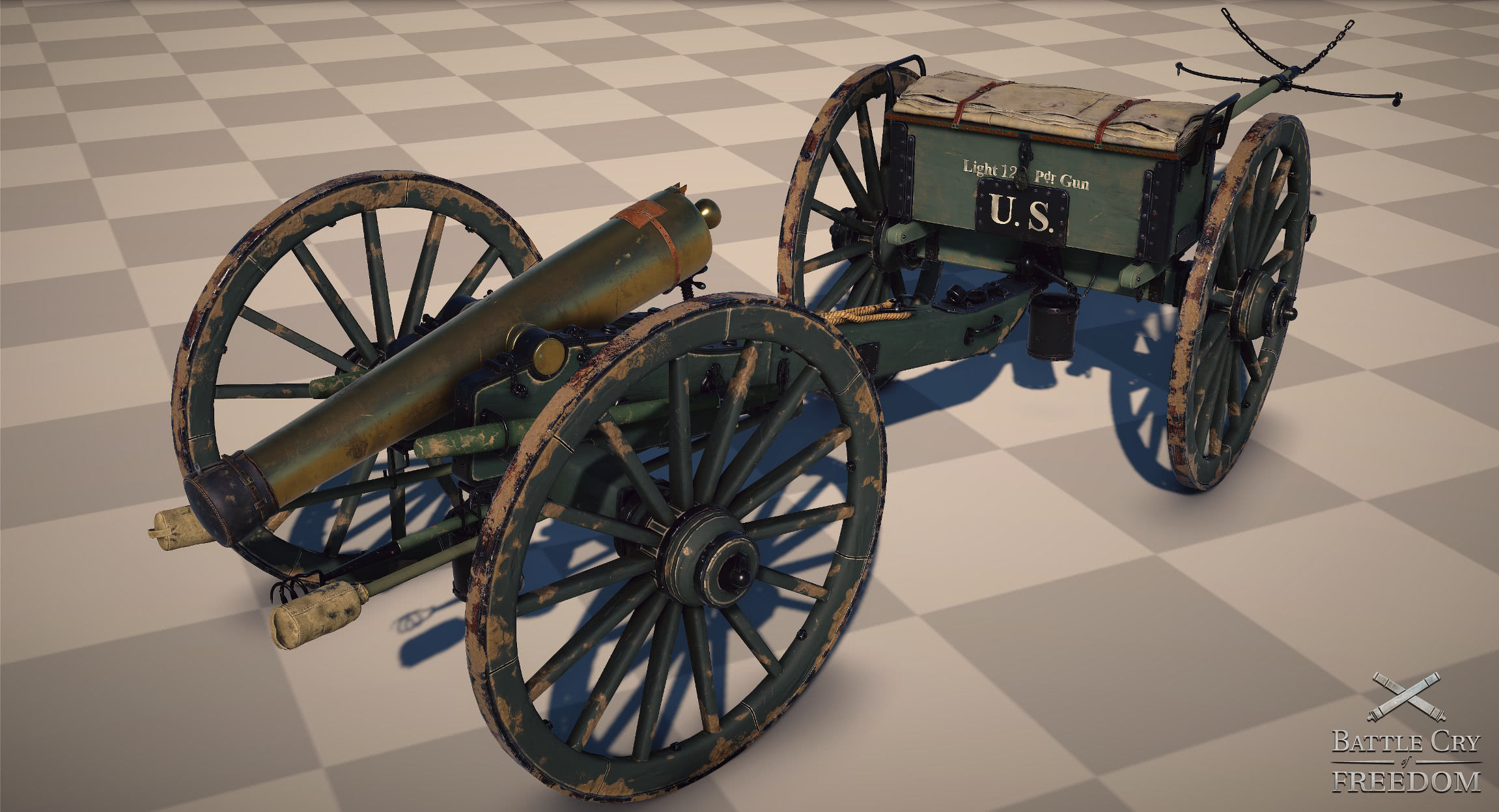 We were not sure what paint job fort/coastal/siege artillery received, if it was regulated at all. As such we made these guns available in 3 different colors. 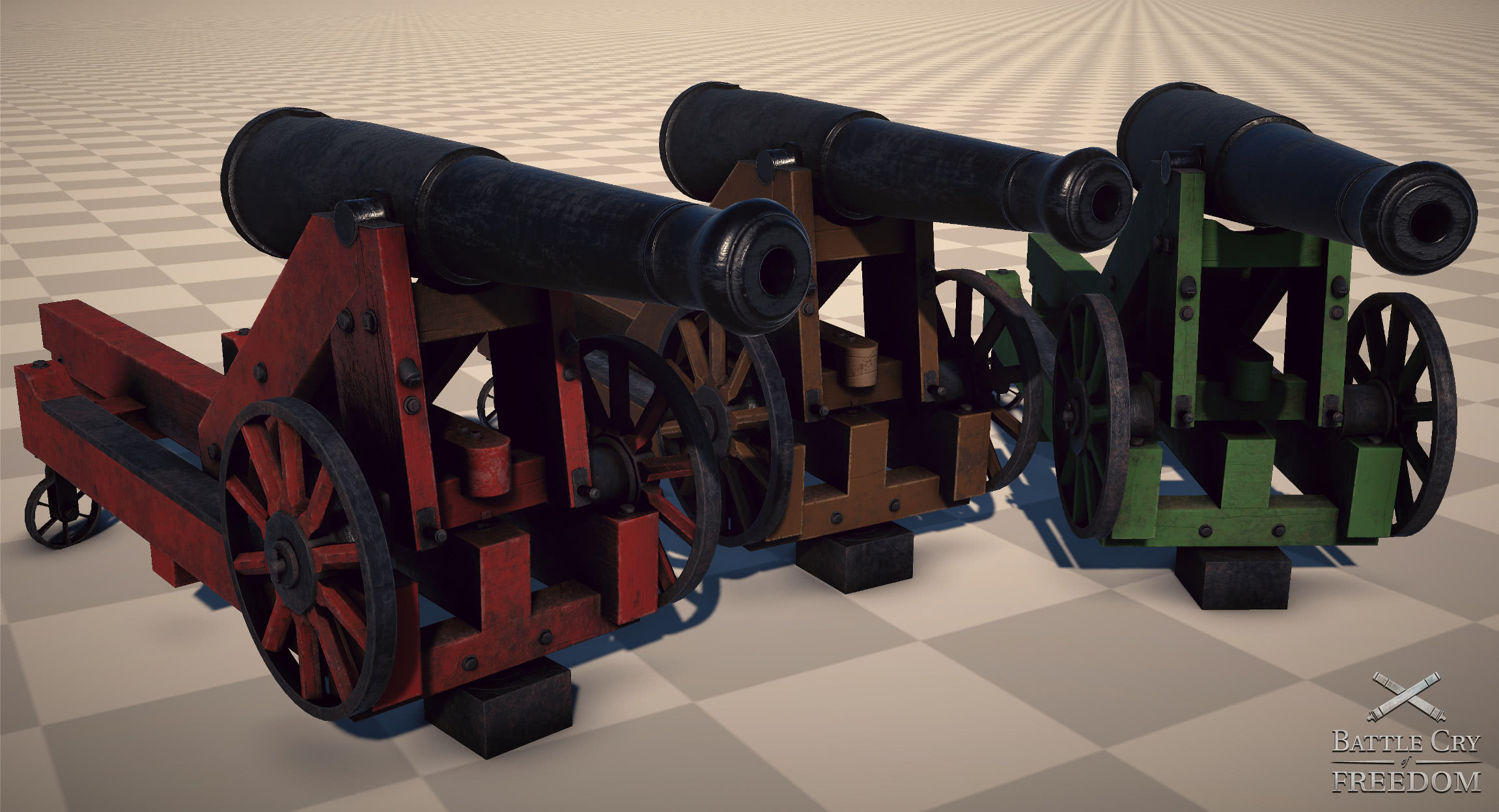 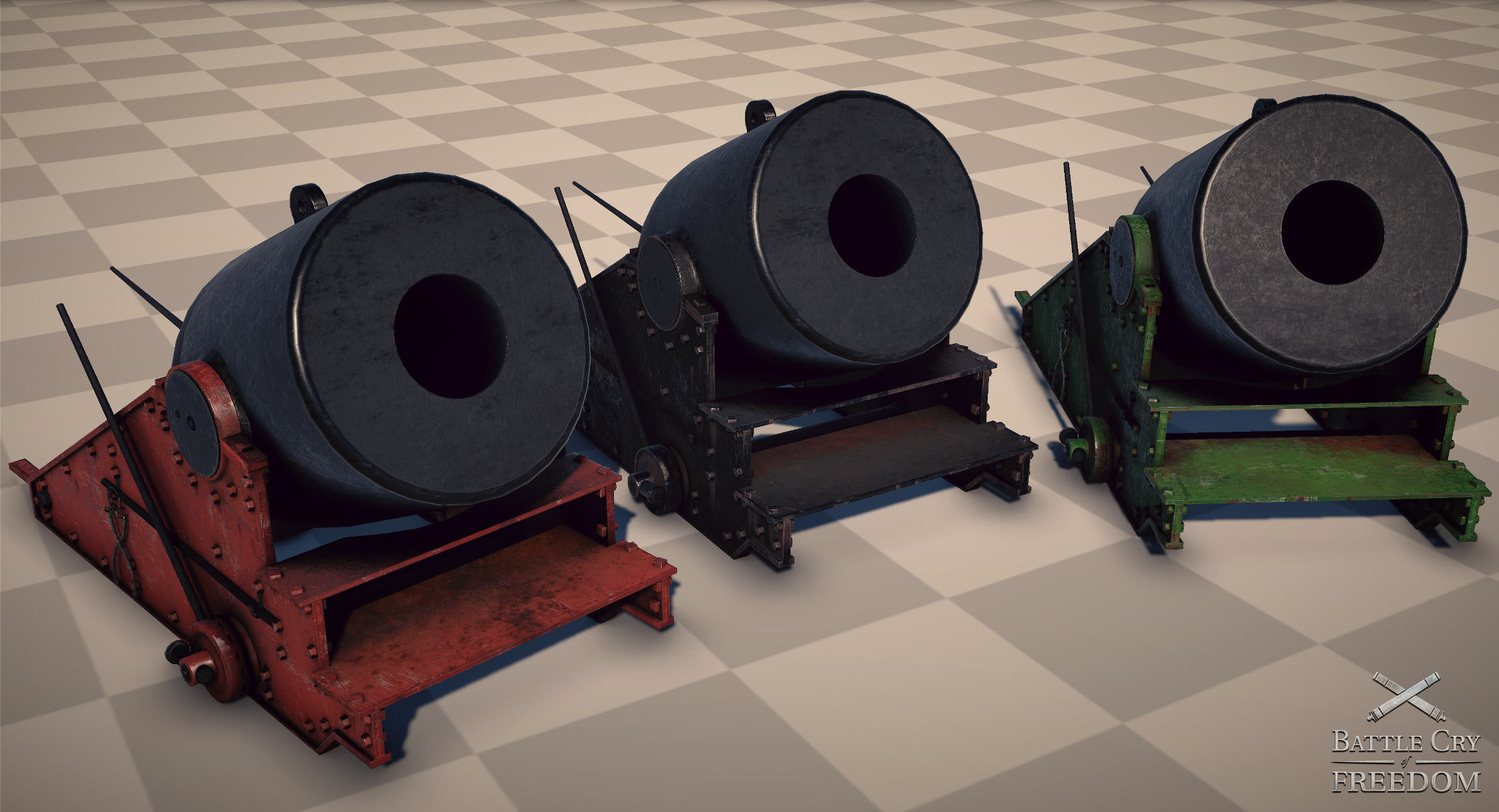 Cannons can break and even explode. Limbers, caissons and artillery pieces can get their wheels shot of. But players will be able to repair broken wheels with the help of the caisson. Caissons carry one spare wheel, which can be used to repair such damage. Limber crates can explode when hit and will throw projectiles in all directions. 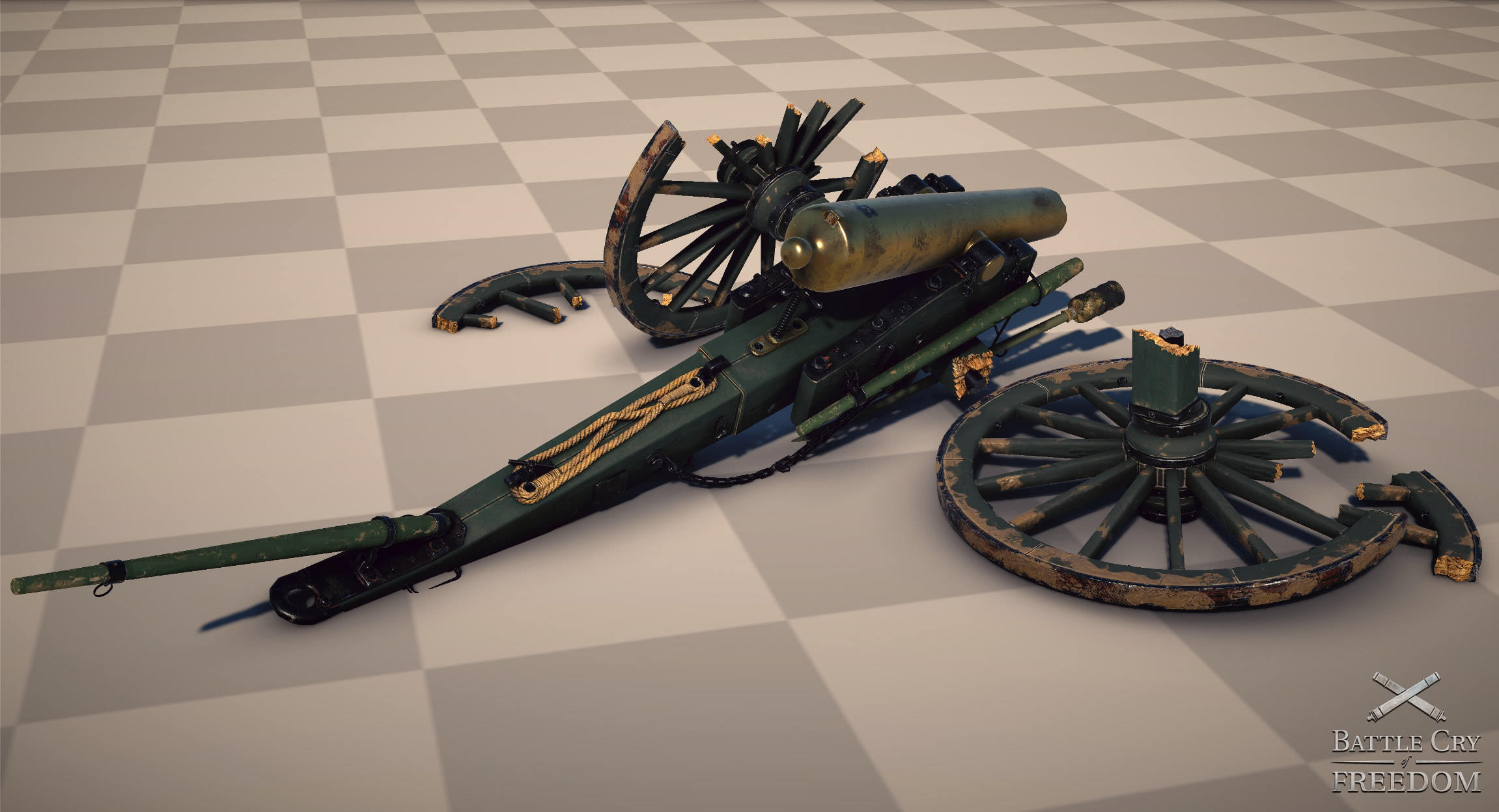 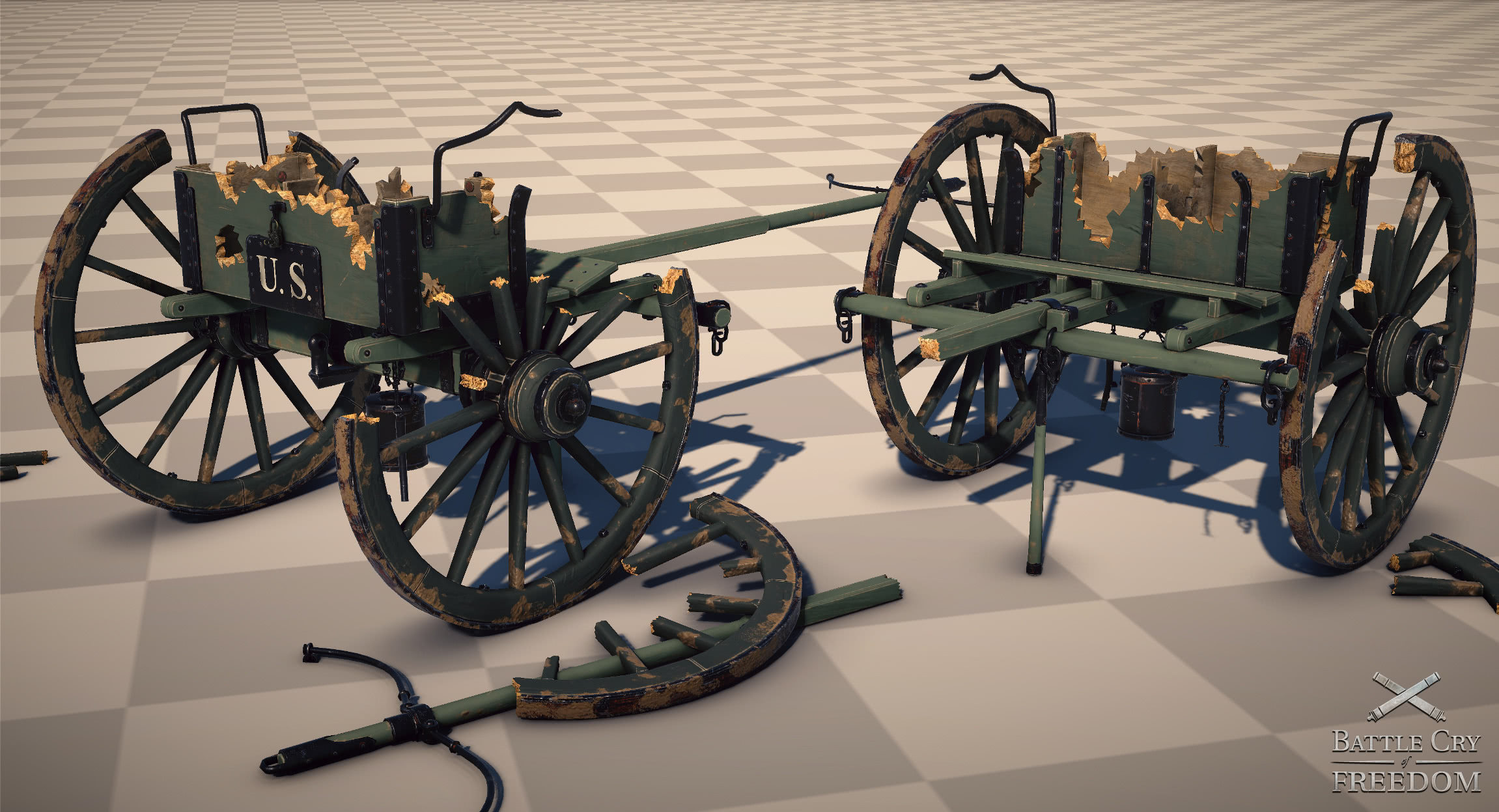 And lastly, to end this blog... Here are two screenshots of our 3inch Ordnance Rifle. 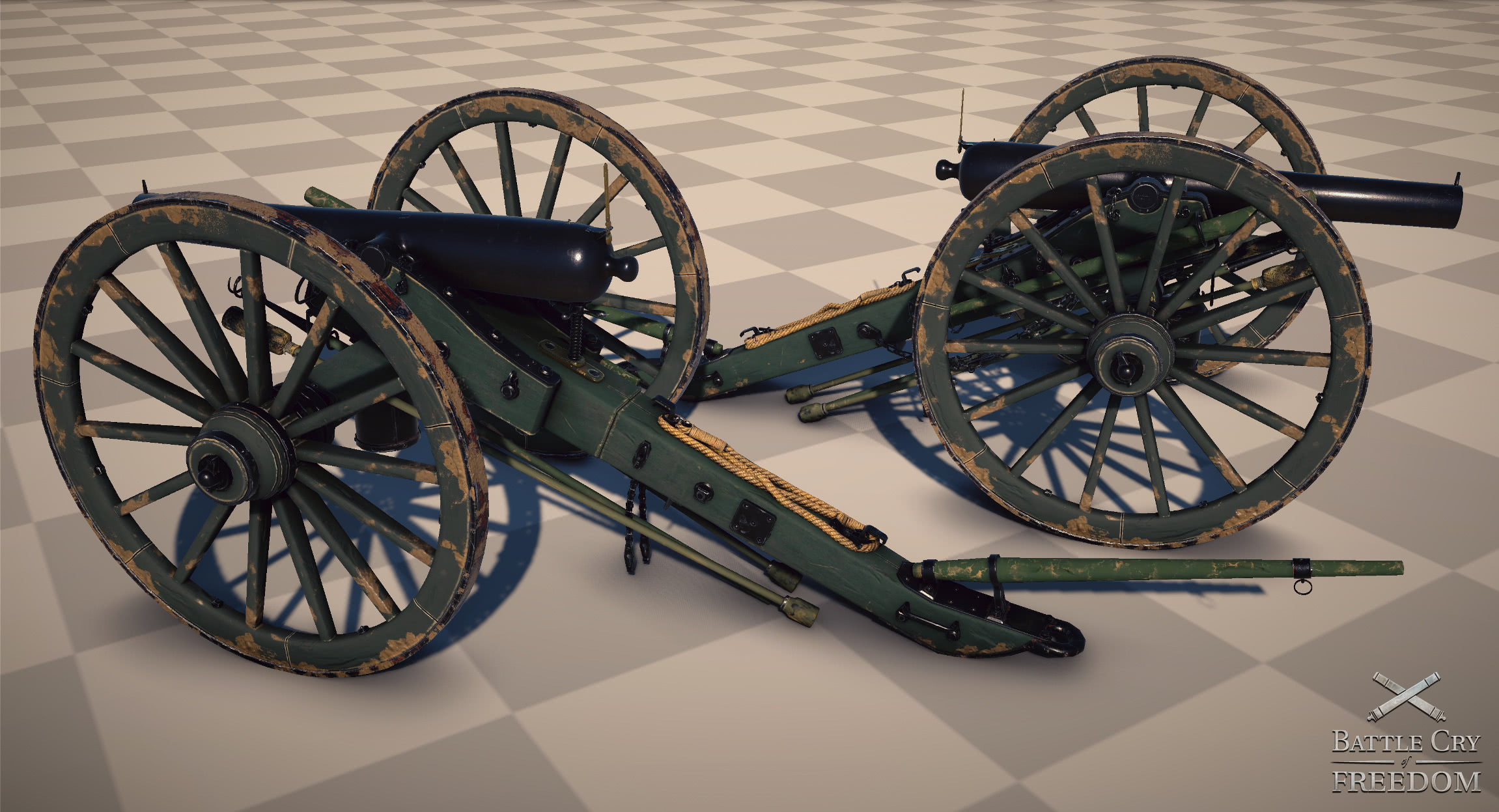 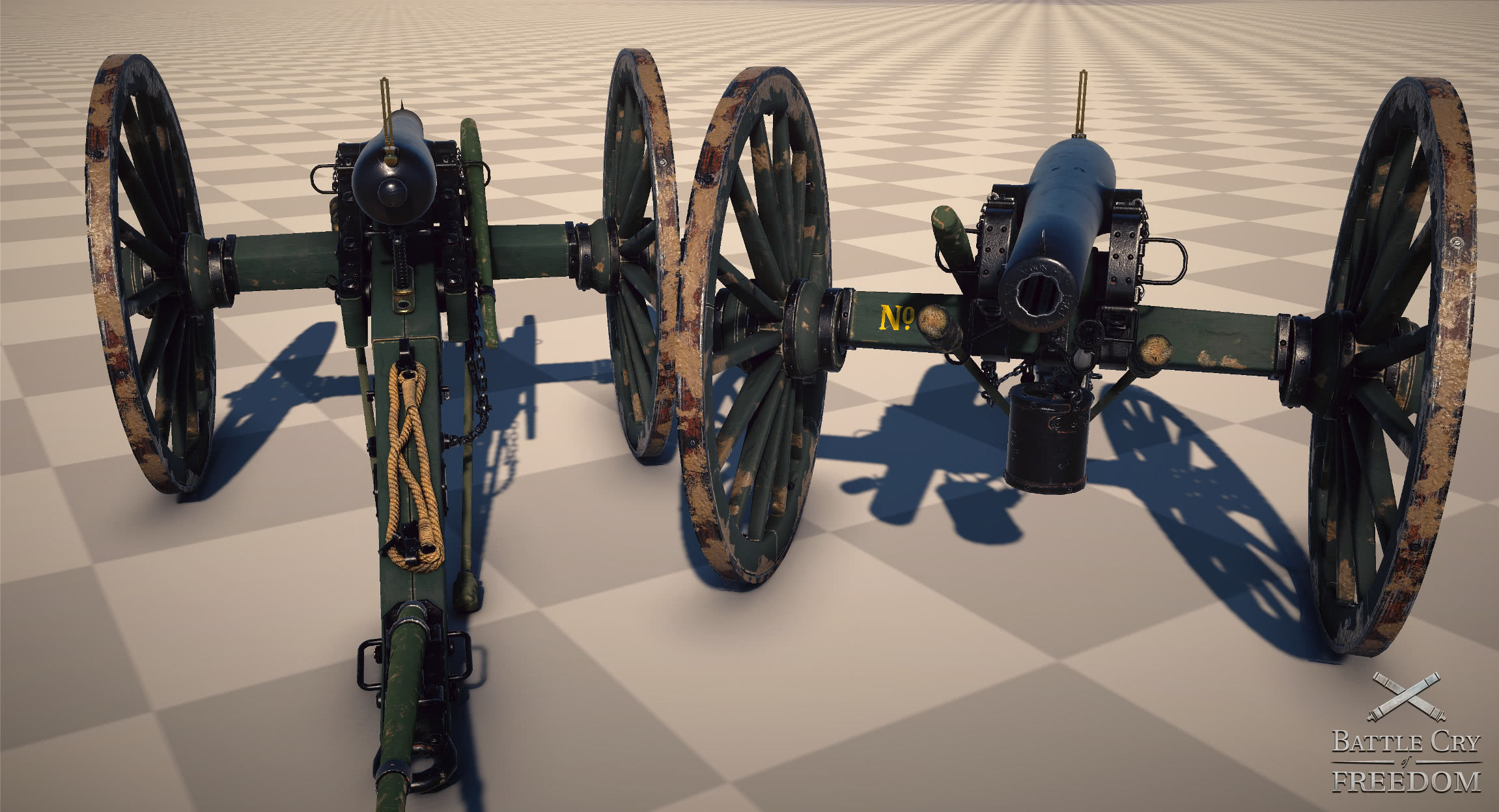 Once again, thank you for reading this weeks installment of the Developer Blog and we will hopefully see you next week!
In next weeks Blog we will be talking about Unit-Graphics.