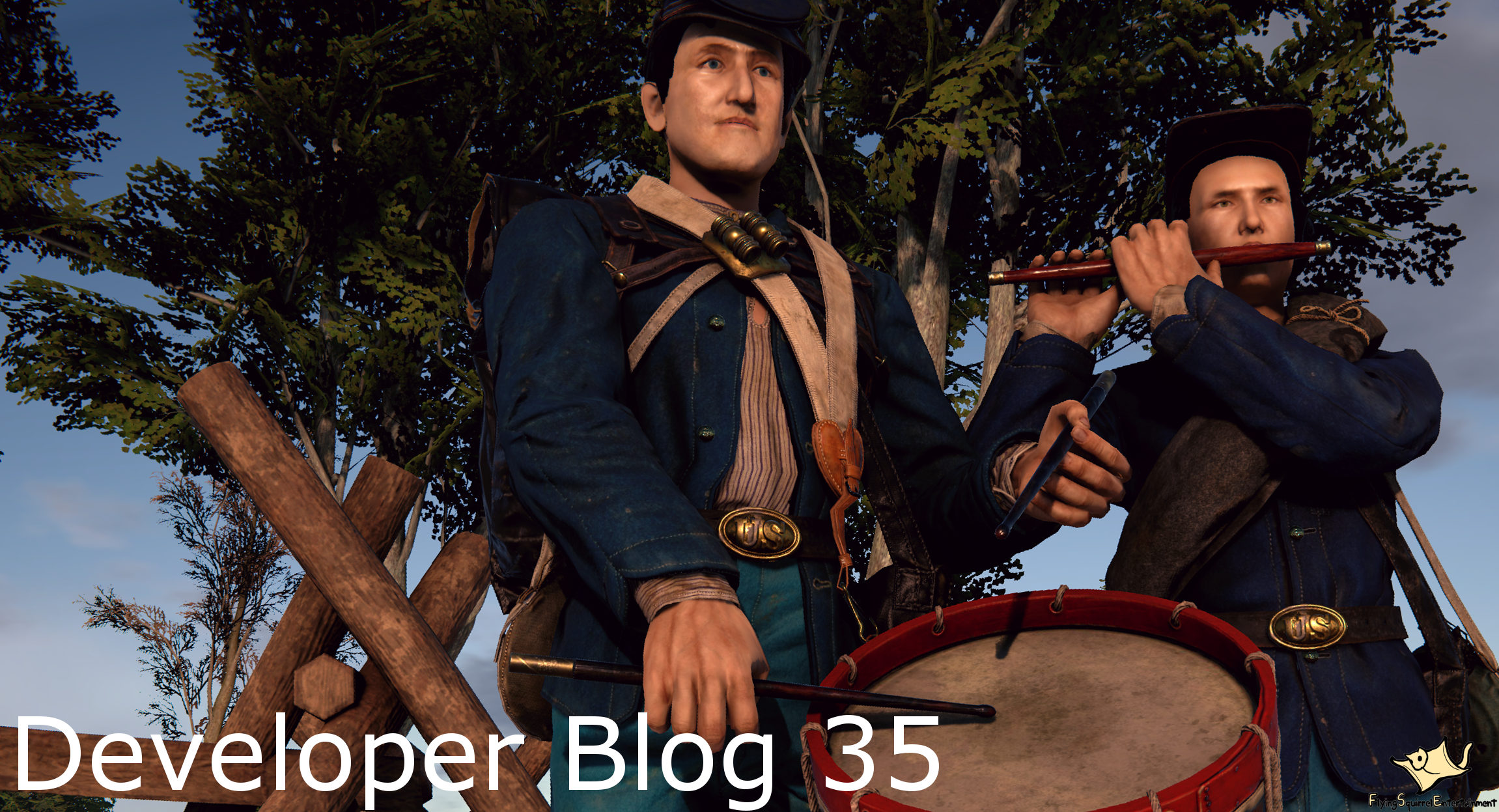 BCoF - Developer Blog 35
Dec 08, 2018
Hello! Welcome back to our Developer Blog. Some of us have gotten sick past week and as such we did not have as much time available as we would have liked to. As such we have to delay the 2nd blog about the 20th Maine for one week. But do not worry, we still got quite some stuff to show! By the way, you can now talk to us directly about the game on our new Discord Server!

Playable Field Musicians
Let’s start with something gameplay/sound related, playable Field Musicans. Just like in Napoleonic Wars, we will obviously once again feature playable musicians. In the game (for now) we will be featuring playable Bugles, Fifes/Flutes and Drums. We are planing on eventually adding more instruments to the game at a later stage...

We currently have 20 fife and drum songs and 28 bugle calls. We are also in the process of recording more fife and drum tracks, and will hopefully end with 28 songs to choose from. Unlike other games in the genre, all of our songs are actual recordings of a musician performing these songs with real music instruments, which has its own up and downsides.

One of the main drawbacks in NW was that musicians were not able to run while playing music and therefore could not keep up with other players. We have changed this and musicians can now run while playing music. But, just like other units, they will still not be able to do anything when crouch walking or sprinting. We have also added the ability to join into a song that already started, which should be extremely useful for anyone who spawned in later. The video below showcases two of us playing some music together. Please remember that everything you see in the game is WIP.


As usual, we have a fairly large number of different instruments modeled and textured. All of them are very detailed and while sadly not offering any special gameplay, they will at least provide some needed visual variation to the Field Music class. Here are a few screenshot of some of our instruments as well as tow ingame-renders of some drums. An in-game render of the musican class unit will follow next week together with the 20th Maine Blog. 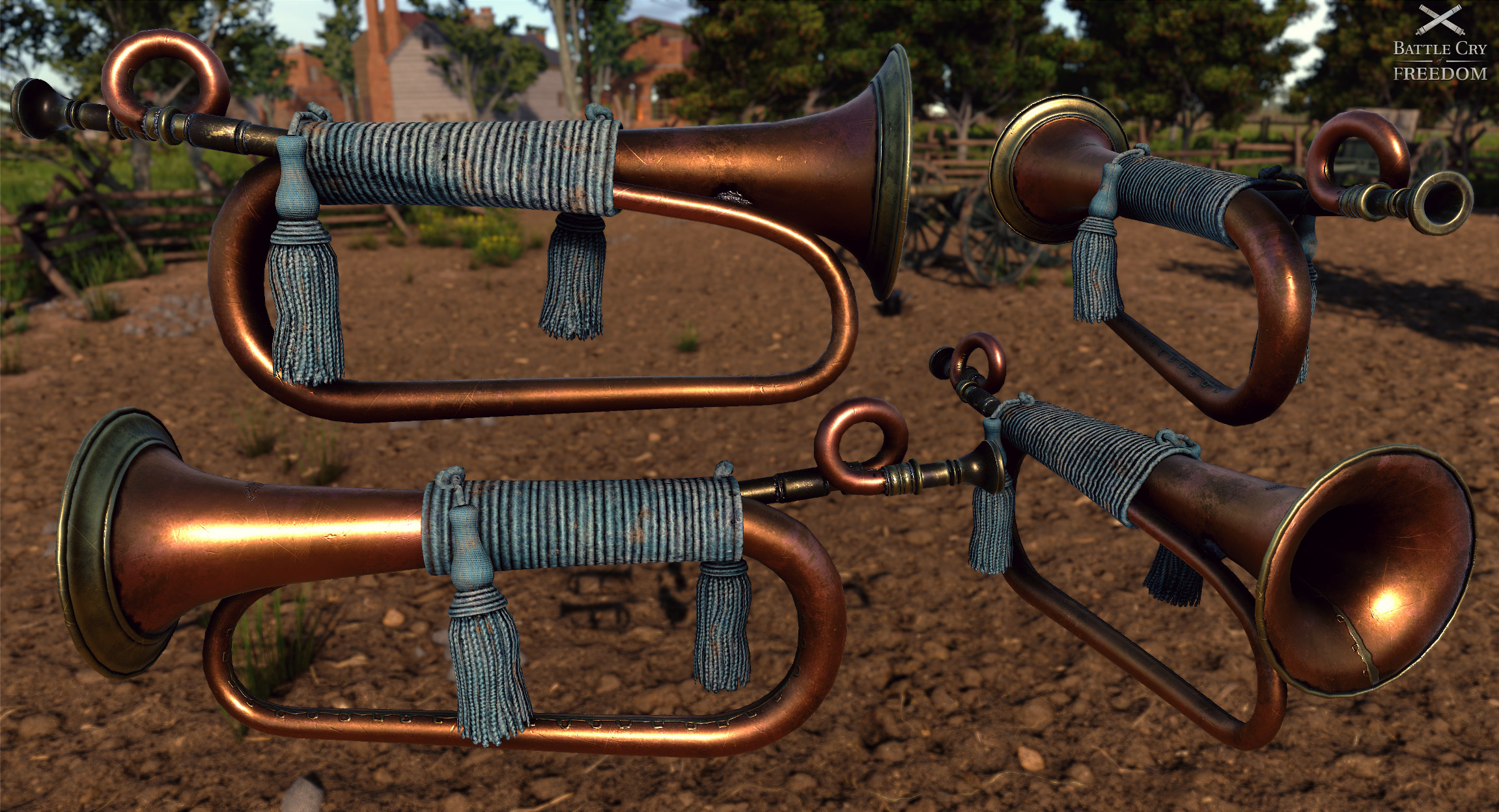 Shouts and voice commands
Being at the topic of playable music, we have a large selection of shouts, death noises and voice commands recorded by different voice actors. Anything from “AAAARGH!” to “Forward March!” will be in the game. Many of the recorded voice commands will eventually have gameplay functionality hooked to them, but we have not programmed that yet. We will talk more about our ideas on this subject once we have actually implemented them in the game. Here is a small selection of some randomly chosen tracks.

Background Music
As many of you know, we included a number of classical music pieces in our previous game. These have been playing and inspiring us in the background for many years now and we want to continue this tradition in Battle Cry of Freedom. But instead of just adding classical music pieces, we decided that we would require something more fitting.

As such, we asked the 2nd South Carolina String Band for help. Some of you might already know them for their wonderful music! They perform and record historically accurate songs on historically accurate instruments. Here is a sample of one of the tracks we will include in the game, "The Bonnie Blue Flag".

But this is not all. We did not want to limit ourselves to just one type of music, so we also included the option to switch to classical music. Players will be able to choose to hear either the 2nd South Carolina String Band or a selection of classical music, many of them recorded by the United States Army Field Band, such as the recording of the "Battle Hymn of the Republic" below.

In addition to that, we have a small selection of tracks made specifically for Battle Cry of Freedom that will play in the main menu. Here is one of our favorites, called "Courage of Fathers".


Once again, thank you for reading our Developer Blog. Hopefully the next blog will actually be about the 20th Maine!